In United States, cardiac events remain the leading cause of death in both men and women (Benjamine et al., 2018). Although the cardiovascular mortality rate has declined in the past few decades, morbidity has not. This is due, in part, to an increased prevalence of ischemic heart disease (IHD). It is noteworthy to mention the statistics reported by Ford and Capewell. These investigators reported discouragingly an increase in cardiovascular mortality in younger women (Ford and Capewell. 2007). Importantly, meta-analysis from 31 countries across the world has shown that the prevalence of IHD symptom, example, exertional angina was similar or slightly higher in women than men (Hemingway et al. 2008). Vaccarino et al. (2010), however, indicated women had less luminal atheroma and anatomical coronary obstruction than men (Vaccarino et al. 2010). Surprisingly, other reports indicated that 50% of women who were evaluated for chest pain had angiographically normal coronary arteries (Shaw et al., 2009).  Thus, the pathophysiology of exertional angina in women may be different from that of men. Although many reports have indicated sex related differences with regard to presentation, pathophysiology for IHD, a clearer and better understanding of these mechanisms is needed to diagnose and treat IHD in women.

Recently, Buchthal et al. (2000) measured myocardial high-energy phosphate at rest and during isometric handgrip exercise in a group of women who had chest pain but there was no obstructive coronary artery disease (Buchthal et al. 2000). In these women, myocardial metabolism was reduced during handgrip exercise. This suggests the development of myocardial ischemia. The authors suggested coronary vasospasm and/or micro vascular disease. However, based on animal work we hypothesize a different mechanism.

During exercise, increased cardiac contractility causes mechanical compression of the inner myocardial layer and results in a reduced ability to augment subendocardial flow, at a time when metabolic demand is high. To compensate for this subendocardial compression, Huang and Feigl have suggested that blood flow is redistributed from the subepicardial to the subendocardial region and maintains transmural myocardial perfusion. These investigators concluded that sympathetic alpha adrenergic coronary vasoconstriction in the subepicardial region was beneficial, even though total transmural myocardial blood flow was somewhat limited (Huang and Feigl, 1988). In a later report, Baumgart et al. (1993) performed detailed studies in experimental dogs and confirmed that neurogenic alpha-adrenergic vasoconstriction has a beneficial effect on transmural perfusion during exercise (Baumgart et al. 1993). Furthermore, Morita et al. (1997) examined the mechanism for the alpha-adrenergic mediated transmural redistribution and found that alpha tone diminished retrograde coronary blood flow during systole, thereby maintaining transmural myocardial perfusion (Morita et al. 1997). Based on these animal reports, we postulate that subendocardial blood flow can be limited when alpha adrenergic constriction is attenuated during exercise. However, data suggesting these processes relevant to human physiology and diseases are lacking.

Recently, we have utilized non-invasive transthoracic Doppler echocardiography in humans and performed studies evaluating coronary vasoconstrictor responses to exercise. These studies demonstrate coronary vasoconstriction within 20 s of static isometric handgrip exercise. The time course of these responses suggests sympathetic neural constrictor mechanisms play a role in coronary constriction (Momen et al. 2009). Furthermore, our important observation was greater coronary vasoconstriction in men than in women (Momen et al. 2010). At this point we do not know whether the diminished coronary vasoconstriction seen in women limits subendocardial flow. To address this issue, a “specific tool” is required, a tool that can help us examine subendocardial flow. Recently, advances in echocardiography and tissue Doppler technique have enabled investigators to determine regional blood flow velocity and global left ventricular function during systole and diastole. (Abraham et al. 2007). Therefore, our future goal is to  obtain high temporal resolution data regarding transmural myocardial blood flow and function by utilizing this modern imaging technology. This will help us understand the underlying mechanism responsible for chest pain in women who have normal coronary arteries. 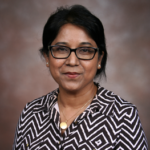 Dr. Afsana Momen serves as an Assistant Professor in the department of Pharmaceutical sciences.

After earning her medical degree from University of Dhaka, Dr. Momen began her carrier in imaging and trained in the Nuclear Medicine Department of Bangladesh Atomic energy Commission. She further obtained clinical training in imaging at the department of Nuclear Medicine, at University Hospital, Vrije University of Brussels in Belgium under supervision of Dr. Axel  Bossuyt.  She completed a two years Master’s program in Medical and Pharmaceutical Research from the same university with a thesis on ‘Myocardial Perfusion and Function’ based on nuclear imaging methodology.

Perspective on the regulations of Drosophila Phototransduction