Copyright © 2018 Author(s) retain the copyright of this article.

This article is published under the terms of the Creative Commons Attribution License 4.0.

Cells are the units of all living organisms. In order for organisms and their organ systems to function correctly, the cells that composed them need to be functional. Cells are composed of membrane bound internal structure, called organelles, which allow the interior of the cell to be compartmentalized with each compartment/organelle carrying a specific function.

Molecules inside the cell move between these compartments via vesicles. One important route inside the cell is the endocytic pathway, which entails trafficking of cargoes from outside to early and late endosome to lysosome. The latest is involved in degrading molecules and damaged organelles from the cell. Defects in these endocytic trafficking mechanisms lead to neurodegeneration and pigment dilution diseases such as Hermansky-Pudlak, and arthrogrypsosis, renal dysfunction and cholestasis (ARC) syndromes 1 and 2.

Many protein complexes, such as homotypic fusion and protein sorting (HOPS) have been identified to play a role in endocytic trafficking. Mutations in VPS33b, a protein of the HOPS complex, as well mutations in VIPASP39/SPE-39, another protein important for the endocytic pathway cause ARC syndrome. Although the proteins and mutations have been identified, the mechanisms responsible for ARC syndrome are not understood. We hypothesized that these mutations prevent interaction between VPS33b and SPE-39, causing ARC syndrome. Surprisingly, some but not all mutations present in ARC patients prevent the binding of VPS33b and SPE-39, suggesting that disruption of the binding is not the main mechanism that leads to ARC syndrome.

Endosome maturation, from early to late endosome to lysome, involves fusion of vesicles (transporting cargoes) to endosomes, as well as addition and removal of proteins in the membrane of endosomes. ARC mutations could cause ARC syndromes by interfering with endosome maturation and therefore endosome-lysosome function. HOPs complex subunits have been described in Golgi compartments, early-late endosomes, and in VIPAS39/SPE-39 positive endosomes.

Using high-resolution microscopy, the co-localization of normal endogenous VPS33b and of VPS33b pathogenic mutations with these compartments was observed. No differences were observed between the co-localization of normal and pathogenic VPS33b with the Golgi compartments, and early-late endosomes, but differences were observed with VIPAS39/SPE-39 positive endosomes.

Down-regulation of VIPAS39/SPE-39 affects delivery of cargoes between early and late endosomal compartments in human cells.

These results suggest a model where Vps33b organelles fuse with VIPAS39/SPE-39 positive endosomes during endosome maturation. ARC syndromes due to mutation in VPS33b and SPE-39 could be explained by a dysfunction of endosome maturation and endocytic pathway. Understanding the mechanisms involved in ARC syndrome is a first step toward the development of potential treatments. 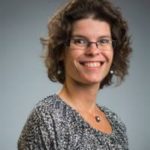 Highly motivated Cell and Molecular Biologist with technical leadership experience. Strong expertise in cellular, molecular and imaging techniques. Strong ability to identify and resolve technical problems.
Describe myself as being perfectionist, flexible, like challenges and working in a team environment with the ability to work independently when necessary.