Copyright © 2018 Author(s) retain the copyright of this article.

This article is published under the terms of the Creative Commons Attribution License 4.0.

It is a common story – an individual broke his arm, which was then bound in a cast for months.  During that time the muscle in the arm wastes away due to muscle atrophy.  When the cast is removed it then takes physical therapy and diligence to build back the muscle by stimulating hypertrophy (growth) through resistance training.  A similar story can be told for astronauts who spend prolonged periods in an environment that lacks gravity, which also leads to muscle atrophy.  While both muscle atrophy and hypertrophy are natural processes, if one could uncover how to increase hypertrophy, and in turn minimize atrophy, then both individuals in the above examples could potentially experience increased quality of life. 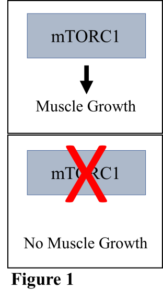 Muscle hypertrophy occurs on a cellular level and is controlled by a group of proteins that make up a complex called the mechanistic target of rapamycin complex 1 (mTORC1).  When mTORC1 is activated, muscle growth can occur, and when it is inhibited, muscle growth is as well (Figure 1). Just as any business has multiple groups of people working together to accomplish a goal, the cell has multiple proteins working together to accomplish, in this example, muscle growth.  mTORC1 is controlled by a protein complex called TSC1/2, which is responsible for turning off mTORC1 and inhibiting muscle growth (Figure 2).  Thankfully, the cell has a mechanism to shut down TSC1/2 so that mTORC1 is free to function, namely the addition of phosphate groups to the TSC1/2 complex, which alters the shape and function of the complex. 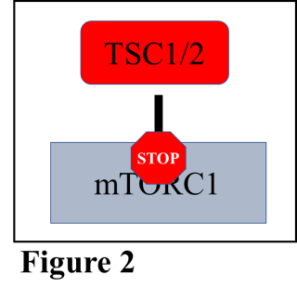 Two proteins are known to be involved in the inhibition of TSC1/2, and hence the activation of mTORC1 and muscle growth.  These proteins are called Akt, and ERK, and both are involved in cell growth as well as cell proliferation.  While it is understood fairly well how these proteins work individually to stimulate muscle growth pathways, how they function together is less understood. 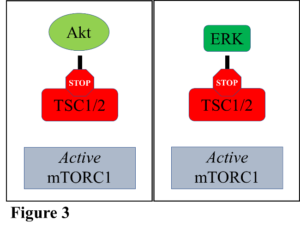 Therefore, research was conducted to examine what occurs when both Akt and ERK work together to inhibit TSC1/2, thus activating mTORC1.  Multiple avenues were utilized to test this question, but to summarize, it was shown that both Akt and ERK increased mTORC1 activity individually, as usual (Figure 3).  It was determined that neither Akt nor ERK could be activated further, which showed the effect of maximal stimulation of mTORC1 by each individual protein.  However, when both Akt and ERK were maximally activated simultaneously, mTORC1 activity increased above what occurs when only Akt or ERK is activated alone (Figure 4).  The results demonstrated that if these proteins are turned on that they can work together to potentially increase muscle growth further than what either protein could do alone. 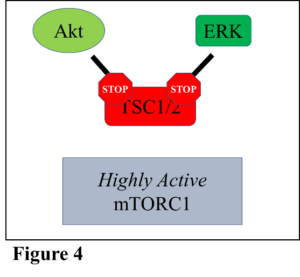 Additionally, it is known that amino acids, which are the individual units that come together to form proteins, also activate mTORC1 independently from interacting with TSC1/2.  Leucine is the amino acid that does this most potently.  Because of this, the activity of the mTORC1 pathway was assessed when it was stimulated by Akt, ERK, and Leucine at the same time. While each activator increased mTORC1 activity when all were added together mTORC1 activity increased even further than when just Akt and ERK stimulated it.

Altogether, the results show that the activation of multiple metabolic pathways simultaneously increase mTORC1 signaling significantly, which in turn leads to greater muscle growth.  This knowledge may be useful in designing therapies to assist those recovering from prolonged disuse of various muscle groups due to injuries, or even working in a weightless environment.  Indeed, if the interactions of these pathways can be further understood it could shed light on how to combat the loss of muscle as individuals age.  More work needs to be done to this end, specifically in a whole organismal model, rather than in a single cell type as done in this research. 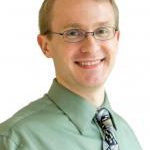 Jeremiah N. Winter received his B.S. in biology from Cornerstone University, where he gained a deep appreciation for Christian colleges, and his Ph.D. in molecular medicine from Penn State University College of Medicine. Following his undergraduate work, he worked as a research assistant at Wayne State University in Detroit, Michigan. At Penn State he studied the mammalian target of rapamycin pathway, which is involved in multiple processes, including muscle hypertrophy. His research has led to publication in the American Journal of Physiology – Cell Physiology (August 2010). Dr. Winter counts himself blessed to be at Emmanuel College, and gives God all the glory for bringing him to Franklin Springs.