Green tea is one of the most popular drinks in the world, second only to water. It acts as an anti-oxidant and is beneficial in the treatment of cancer, obesity, viral infections (including HIV), and Alzheimer’s disease. Unlike drugs or many plant-derived medicinal compounds, green tea is readily available, inexpensive, and has a pleasant taste. These qualities make it an excellent addition to therapies for many diseases, either alone or combined with some other drugs. Polyphenols are powerful anti-oxidants found in green tea.  Epigallocatechin gallate (EGCG) is the most abundant, active, and best studied green tea polyphenols and is often used in its purified form to treat illnesses. Epicatechin (EC) is found in lower concentrations in green tea and appears to have less medicinal value alone. This study briefly shows that EGCG combined with EC works much better than either polyphenol alone in stimulating normal human T lymphocyte functions and reducing growth of cancerous T lymphocytes.

Normal T lymphocytes, especially Th1 cells, are the cornerstone of the immune response, especially in defense against viruses. They are stimulated to divide and increase their activities by the Th1 cytokine (immune messenger molecule) tumor necrosis factor-beta (TNF-beta) and their division and activity  are decreased by the T regulatory cytokine interleukin-10 (IL-10). High levels of TNF-beta and low levels of IL-10 thus stimulate normal T lymphocytes to grow and protect the body from multiple diseases. Growth of cancerous T lymphocytes is similar, so that effective treatment for this leukemia would lower levels of TNF-beta, increase levels of IL-10, and block leukemic cell growth.

Production of the T regulatory and anti-growth cytokine IL-10 by leukemia cells (Table 5) is greatly increased by a combination of 100 μM EC and 20 μM EGCG (210 pM IL-10 in the absence of EC and EGCG compared to 1971 pM in the presence of both polyphenols; 9-fold increase). Production of IL-10 by normal T lymphocytes (Table 6), however, is much less affected by EC and

EGCG (651 pM IL-10 in the absence of EC and EGCG compared to 902 pM IL-10, an increase of only 28%. These data show that combining EC and EGCG increases production of the anti-growth cytokine IL-10 much more powerfully by leukemic lymphocytes than normal ones.

This study shows that a combination of green tea polyphenols, EC and EGCG is much more effective than either polyphenol alone in stopping growth of leukemic T cells and production of associated cytokines and encouraging growth of protective normal T lymphocytes. 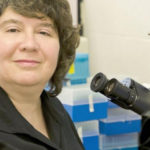 Telling DNA what to do and how to do it: A Perspective article summarizing “Cell Cycle-Specific Cleavage of Scc2 Regulating its Cohesin Deposition Activity” and “Phosphorylation of the Scc2 cohesin deposition complex subunit regulating chromosome condensation through cohesin integrity”

Perspective on the regulations of Drosophila Phototransduction